For emergency incident information within the Colestin Rural Fire District, in addition to this website, you can now call or text the CRFD Public Information Officer telephone number at 541-880-8350.

You can now also get up-to-the-minute emergency incident information updates on our PIO phone's social media : Access our PIO's Twitter feed at @ColestinD (at Colestin capital-D as in district) and our PIO's Facebook page at Colestin Rural Fire District.

It is incumbent upon residents and/or owners to know and abide by fire season regulations.

Current fire season regulations are always posted within our district at our Ski Rd. and south district kiosks (see below for locations), and here on our website on our current fire restrictions page.

You can now sign up to receive fire season updates by email of any changes in the fire danger level and public regulated activity restrictions during fire season. (This is much faster than when residents will receive notification by postcard.)

Email notices will include fire season information updates only (without attachments).

To sign up, please provide us with your email address. (This email goes to CRFD's webmaster. You will receive an initial confirmation email as soon as possible that you have been added.)

Your email address will be used for the above purpose only, and will not be shared.

You can unsubscribe or re-subscribe at any time.

Thank you for choosing to be an informed member of the Colestin community!

In CRFD's bulletin case at the postal kiosk on the top road of the district (Mt. Ashland Ski Road), at approx. mile marker one, on the left, next to the covered postal lock boxes and row of mail boxes);

On our mini-kiosk at CRFD's Fire Station One at 1700 Colestin Road, (on the right-hand side of the station house);

In the bulletin case at our south valley kiosk (to the right of our fire indicator sign structure) on lower Colestin Rd. near the Oregon-Calif. border;

Here on our website, where many documents can also be downloaded and printed.


GENERAL PUBLIC ANNOUNCEMENT TO ALL SOLICITORS AND ADVERTISERS: DO NOT CONTACT THE COLESTIN RURAL FIRE DISTRICT BY ANY MEANS, INCLUDING PHONE CALLS, ELECTRONIC MAIL, INSTANT MESSAGING OR TEXTING, OR STANDARD POSTAL MAIL. PERSISTENCE IN DOING SO MAY RESULT IN LEGAL ACTION.

If you are calling about an Emergency:

The 9-1-1 dispatch operator will relay all relevant information to us locally,

as well as contacting any needed additional back-up resources.

The Colestin Rural Fire District can be reached:

[No Assistant Chief(s) at this time.]

Michelle is the Board-appointed replacement for this position as of May, 2020, serving the remainder of Pam Haunschild's term ending in May, 2021. Michelle is our most recent Board member; she comes from a long-time local family, knows the area well, and will help represent the mid-and lower Colestin valley communities within the fire district. We are very pleased to have her on the Board.

Previously, Nancy Ames was appointed by the Board to this position as a temporary replacement for the 4-year term previously served by Cheri Avgeris.

Previously, Cheri Avgeris held this position, re-elected most recently in May, 2009. Cheri retired from serving on the Board and from serving for 28 years with the Fire District in Jan., 2011 (see below).

Brian was appointed by the Board at the Nov. 2019 meeting to replace Cindy Warzyn on the board, who resigned effective Dec. 1st due to moving out of the district. Brian will serve for the remaining three years of the 4-year term for this position, until May 2023.

Cindy served for over 10 years on the board as a member and as Vice-Chair, and the rest of the board remains very appreciative of her many years of service to our district, including her work and leadership on the District's annual community picnic.

Re-elected in May 2019 to a 4-year term ending in May 2023. Previously: Appointed by the Board in September 2017 to serve the remainder of the term for this position following Alissa Lipking's resignation. Tod is also a previous Board member (see below).

Before Alissa, this position was held by Tod Davies, who was Board-appointed in May, 2007, to replace and complete the term begun May, 2007, of re-elected and subsequently resigned member Mary Jo Trainor.  Tod was re-elected Vice-Chair by Board vote in Feb. 2011 until her resignation in Oct. 2011.

if you have any questions about the District, our policies, fire season restrictions, etc., beyond the information presented here on our website, or if you have any other concerns or inquiries.

if you are new to the Colestin - Mt. Ashland area and would like to receive our fire season announcements and other occasional community educational information, please email us (c/o webmaster@crfd.org) with your name and snail-mail address.

if you are not new but are not receiving our mailings, please let us know, and help us correct our mailing list information.

You are also always welcome to e-mail the webmaster with website feedback, problems, comments or inquiries.


Board Elections - Most Recent & Next:


The most recently held Special Districts Election was on May 16th, 2017. In that election, the Colestin Rural Fire District Board had two four-year positions open. Both incumbents were re-elected.

Our next election for the CRFD Board is May 21, 2019. Three positions (Pos. 3, Pos. 4, & Pos. 5) will be open for election. (All positions are now four-year terms.) All of our incumbents for these seats will be running again.

Board elections for Special Districts, including volunteer fire districts, are held by Jackson County, Oregon, and normally occur in spring (March or May) of odd-numbered years.

Eligibility criteria for holding a seat on the Fire District's Board is that one must have a local permanent (primary) address within the district.

The filing date for anyone who is interested to file to run for the Board is approx. two months before the election date (in March for elections held in May).

The filing fee to declare candidacy is $10; submitting a nominating petition has no cost but must include signatures of at least ten percent of the registered voters in the district based on numbers in the last election.

Election and filing information and all necessary documents, including a Candidates Manual and the filing Form (SEL 190), can also be downloaded from Jackson County's website on the Elections Forms page (http://jacksoncountyor.org/clerk/Elections/Election-Forms). (Scroll down to the "Candidate Packet" for the appropriate election and date.)

Cheri Avgeris announced her retirement from the Fire District, and thus from the Board, in January, 2011.

Cheri has served the District as a volunteer in numerous capacities since the District received its official charter from Jackson County in August of 1983. Even before this, following the Colestin Fire in August, 1981, she was also instrumental in forming the District with other neighbors, and getting the first phone services to come into the valley in 1982. Since 1983 onward, Cheri has served almost continuously on the Board of Directors; for the past ten-plus years, she has also served as its elected Treasurer, providing the Board with detailed monthly financial reports.

Also since the District began, in addition to actively and continuously participating as a firefighter, Cheri has worked to develop the District's first responder Emergency Medical Services unit, becoming the Medical Unit Director for the District as our firefighting and emergency medical response services have grown and our first responder training has increased in order to meet an ever-higher standard of care and professionalism. 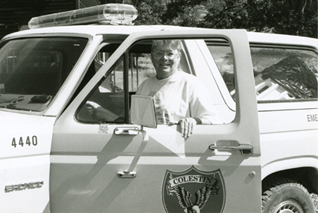 Among our emergency medical responders, Cheri has responded to more medical calls over the years than anyone else in our District. At any time of day or night, she has been the always-reliable "go-to" person for emergency medical services here in the valley, selflessly putting the needs of others before her own, time and time again, often because, especially in the early years, there wasn't anybody else with her level of training who was available and able to go, when the call came in.

Cheri has been an integral member of our District, central to its continued existence and effective functioning, for almost thirty years. Often over-worked due to her dedication, and sometimes under-thanked and taken for granted as "part of the District landscape" after so many years, she leaves a large crater to fill in that same landscape now, as we find ourselves compelled to pick up the many responsibilities, commitments, and functions that she carried and handled for so long.

Her dedication and presence in our District will be long missed, and for those of us who had the experience of knowing and working with her, we will also miss her warm, lively personality, her caring nature, her integrity of character, and her friendship.

With deep regret, but also with understanding, and sincere appreciation for all that Cheri has done and given to the District throughout the past 28-plus years, the Board has accepted her notice of retirement from the District and resignation from the Board. We all wish her the best possible future in her well-deserved retirement and life beyond the Fire District.